Two parallel agreements signed with the Ministry of Economic Development and the European Commission. A further 2,583 will be added to the more than 9,000 access points already present, and network coverage will also be increased in public places, in structures on the Adriatic coast and in sports facilities and spaces in the area. Within three months the start of the works, which have already started in some municipalities.
Undersecretary Liuzzi: "Piazza Wifi Italia a successful model", the managing director of Infratel Italia, Bellezza: "Model agreement that we will replicate in other areas of the country".

Bologna - An Emilia-Romagna increasingly digital and connected which, thanks to a public wifi network that extends to the whole territory without excluding any municipality, experiments with the latest technologies and is strengthened in particular in public spaces, from parks to beaches up to sports facilities and spaces.

To make this result possible, two parallel agreements that the Region has entered into with the Ministry of Economic Development and the European Commission, recently formalized with two resolutions of the Executive.

From Piacenza to Rimini all citizens will be able to connect to the EmiliaRomagnaWiFi regional public network - able to guarantee easy, free, and fast Internet access - without the need to authenticate and active every day 24 hours a day: the signal will be extended to 50 municipalities not yet reached by the Wifi network, and strengthened in particular as regards public areas such as squares, parks, beaches, hospitals, libraries and sports facilities. Over the next three months, all the works will start, which in some municipalities have already started.

"We are the first Region in Italy to propose and formalize synergies in the context of national and European projects in the field of public WiFi - says the Councilor for the Digital Agenda, Paola Salomoni -, and finally the citizens of all our municipalities will be able to use Free internet in public spaces. The pandemic has only accelerated an inevitable process of transition towards the digitalization of services, and for this reason we want to guarantee every Emilia-Romagna the right to a connection. This is a fundamental step in the creation of our Digital Agenda, which integrates perfectly, for example, with the web and technology education courses we offer for all age groups. We thank - adds Salomoni - the Ministry of Economic Development that with the 'Piazza Wifi Italia' project, in collaboration with Infratel Italia Spa, has set itself the goal of allowing all citizens to connect, free of charge and in a simple way through the App dedicated to a free and widespread wifi network throughout the country, a goal that the Emilia-Romagna Region has long espoused ".

Agreements with the Ministry and the European Commission

The agreement with the Ministry of Economic Development provides that to the almost 9,000 access points of EmiliaRomagnaWiFi already activated in Emilia-Romagna (in squares, hospitals, libraries, social centers, youth centers and sports facilities), another 2,583 will be added, through joining the MiSE “Piazza WiFi Italia” project. Infratel Italia will follow the installation of WiFi hotspots in the 50 municipalities of the regional territory not yet reached by the signal. In addition, activities will be intensified to increase the coverage of the WiFi network, wireless and free, in public places, beaches and spaces dedicated to sports. The memorandum of understanding lasts until June 30, 2024. The new devices, like the existing ones, will be connected to the regional fiber-optic network managed by Lepida Scpa.

"Piazza Wifi Italia represents a successful model promoted by the Ministry of Economic Development for the digitalization action in the territories and the signing of this agreement constitutes a further step in reducing the digital divide - comments Mirella Liuzzi, Undersecretary of the Ministry of Economic Development -. The will of the Emilia-Romagna Region and all the actors involved made it possible to carry out this important intervention in favor of citizens, businesses and tourists; an initiative that reaffirms the importance of connectivity and network infrastructure which, never as in the last year, have become fundamental elements of the country's social inclusion and economic cohesion ". “Collaboration with the Regions is essential to spread the free and free connectivity of Piazza Wi-Fi Italia. The agreement reached with Emilia-Romagna represents a model that we intend to replicate in other areas of the country "adds Marco Bellezza, managing director of Infratel Italia. The agreement with the European Commission instead provides for further synergy for the current and future development of WiFi networks. From now on, the repeaters of the European WiFi4Eu connection will be able to transmit the EmiliaRomagnaWifi network and vice versa: in this way the regional line will be strengthened in those municipalities that have won the European Wifi4EU tender, since it will be able to rely on more transmitters. At the same time, Italian visitors who have already connected to the wifi.italia.it network and foreign visitors, who have already made use of the Wifi4EU service, will be able to connect automatically to the Emilia-Romagna regional network without having to perform any operation. The wi-fi points in Emilia-Romagna, by province The 8,957 wifi points currently present in Emilia-Romagna are divided as follows, by province: 3,048 in Bologna, 1,347 in Reggio Emilia, 1,281 in Modena, 1,216 in Ferrara, 659 Forlì-Cesena, 410 Parma, 410 Ravenna, 391 Piacenza, 195 Rimini . On the website of the Region, at the page www.EmiliaRomagnaWiFi.it there is a map with the points present in the individual municipalities.

It is the Municipality of Montabone, Piemonte, the last administration has asked to join the project. 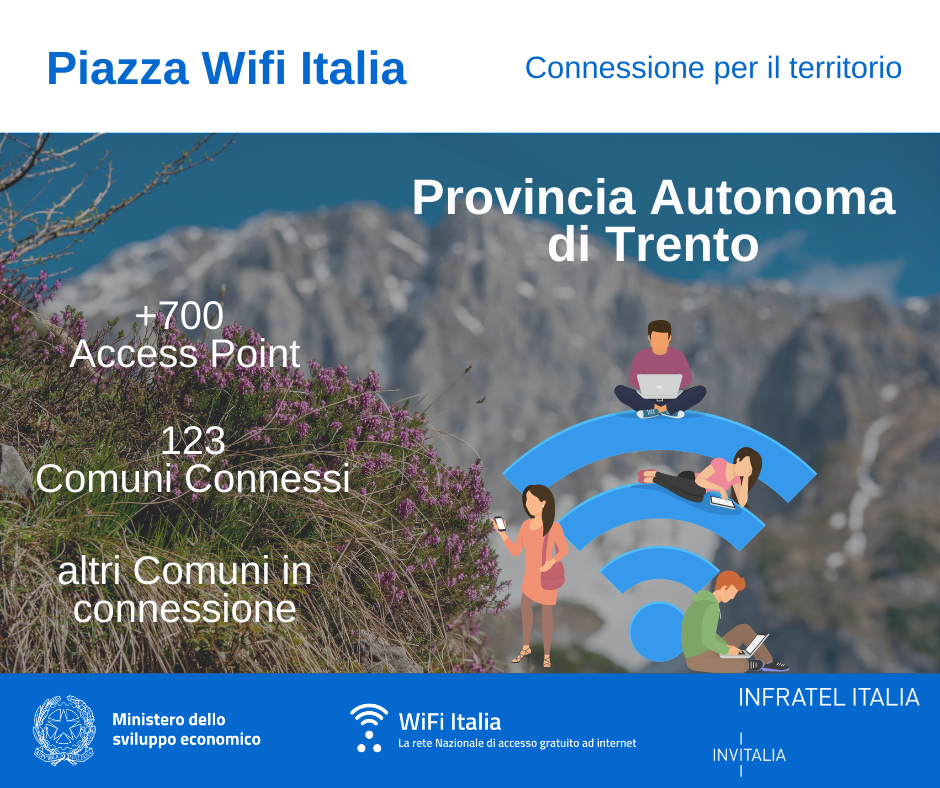